In my defence, I wasn’t the only invitee who read “blind tasting” on the email and briefly thought “blindfold tasting”. It wasn’t, however, a 50 Shades of Grey style sensory encounter that bought us to Islington on a wet Wednesday evening, but rather an event organised by the Grant’s Family Reserve whisky brand.

As regular readers know, Scotch is not my top tipple, but I know enough about the whisky market to appreciate that blended scotch has been on a bit of a roller coaster ride in reputation terms over recent years.

Traditionally, the art of the blender was key to the success of a Scotch brand. Take a number of whiskies with distinctive characteristics and put them together to create a blend that delivered the best elements of them all without going to extremes in flavour terms.

The Cult of the Single Malt has turned that view arse-about-face, with today’s whisky connoisseur actively seeking out the boundaries of flavour profile, looking for those extremes of peatiness, spice and other flavour characters.

In a quote the appropriately Scottish Miss Jean Brodie, “for those who like that sort of thing, that is the sort of thing they like.” In the process, though, it has become fashionable to look down on blended whisky.

However successful the Scotch Whisky industry has been in building its appeal to the Single Malt purists, I’d argue that it has sacrificed some of the accessibility that gave blended brands its broad appeal in the process. That, in turn has created an opportunity for American whisky in particular to strongly build share in the UK market.

As part of the fightback, the team from Grants kicked off with whisky cocktails, which in itself would have some Scotch purists reaching for their heart pills. Once we were suitably mellowed – and reassured that no blindfolds would be required –  the assembled group of around 10 people was taken through a blind tasting by acclaimed whisky writer Rob Allanson.

We tried three whiskies without being given any details. Drawing on all the experience of my Beer Sommelier training, I carefully appraised the whiskies for clarity, aroma and taste before skilfully picking the wrong one – at least as far as my hosts were concerned. We’d tasted three blends, and while the majority of the group had diplomatically picked Grant’s Family Reserve, my finely tuned palate preferred Famous Grouse.

The second stage of the evening, again under Rob’s expert tutelage, required us to blend our own whisky. Armed with jars, bottle, test tubes and pipettes, as well as five different styles of base spirit, we set about enthusiastically blending different percentages of peaty, spicy, sweet and fruity to come up with a winning blend.

On the night I was, I’ll admit, very happy with my spice-forward blend, which I called ‘Spice Trade’, and went away armed with a couple of 100ml bottles. However, when I broke these out for some friends at a dinner party a few days later, it has to be said that the response wasn’t as universally enthusiastic as I’d hoped. ‘Cleaning fluid’ and ‘antiseptic’ were two of the kinder tasting notes.

Fair enough. I have a newfound respect for the art of the master blender. I’ll leave it to the experts. 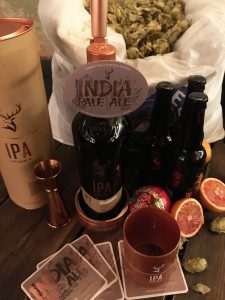 I have a complicated relationship with whisky, dating back over 35 years to an ill-judged evening in the bar at uni and an early-hours visit to the A&E department at Colchester General Hospital. When the runes are right and the wind’s in the right direction, an unexpected whiff of Scotland’s finest can still summon up memories best left buried, a reaction I’m sure Proust never had to a madeleine.

On the other hand, I love IPA. I loved IPA before it was fashionable, and I’ll still love IPA when the last hipster’s moustache wax has hardened beyond the ability of science to save the density from dragging its wearer to the earth’s core.

So, it was with somewhat mixed feelings that I accepted an invitation to a masterclass to mark the launch of the Glenfiddich IPA Experiment, a collaboration between venerable distiller William Grant & Sons and the upstart Speyside Craft Brewery. Despite the 125-year age gap between William Grant setting up shop in 1887 and Speyside just four years ago, the two family-run enterprise have joined forces in the shape of Glenfiddich malt master Brian Kinsman and Speyside brewer Seb Jones.

The main result of the collaboration is a single malt whisky finished in IPA casks, with the 43% ABV Glenfiddich IPA Experiment now available from selected retailers, and being served in Young’s pubs as part of the pub operators Whisky Tide promotion.

Seb had three tries at creating an IPA before he came up with the flavour he was after. He says: “We did three trial recipes, each was a single hop IPA. The hop that made the grade was Challenger – which is a UK hop similar to that used in the original IPAs. This was serendipitous as the barometer of choice was with flavour profile and cellulose (wood) interaction.”

The resulting beer was kept in American oak casks, which were them emptied and filled with the whisky. That’s a very simple description of a very complicated process, but fortunately we were equipped with a handy, simple-to-follow guide that can explain it far better than I can: 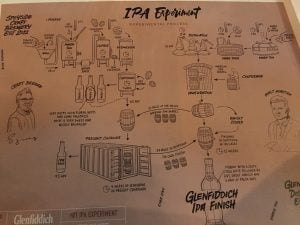 All clear now? Excellent.  What I can do is tell you how the result tastes. Under the watchful eye of both Glenfiddich Ambassador Mark Thomson, as well as Seb Jones himself, attendees as the masterclass has the chance to sample the whisky, the IPA created by Seb to go in the barrels, and also the barrel-aged beer that subsequently emerged.

Taking the whisky first, the essential sweetness of every whisky is the first thing that hit my tastebuds. Beer and whisky are, essentially, the same products – whisky is distilled beer or, more accurately, distilled ale, given that the original distinction was that ale was unhopped and beer had hops added to counteract that sweetness.

On a second sip – always go back for a second sip – the citrus sharpness and fresh hop flavours have definitely had an interesting effect on the whisky.

More interesting was the beer. The original 6% ABV IPA created by Seb is, as he admits himself, fairly in-your-face thanks to the need for the beer to leave a chunk of its essence in the barrel. The earthy, peppery hop notes are up front, with the grapefruit and floral flavours harder to find.

The second beer is far more interesting. Its time in the barrel has knocked the rough edges of the more robust hop flavours to create a rounded, smooth IPA that delivers some unexpected flavours including, to my palate at least, liquorice and vanilla.

Whether whisky and I are every entirely comfortable with each other remains to be seen, but if brewers and distillers working together can create beers of this calibre, I’m definitely on board for the brews. 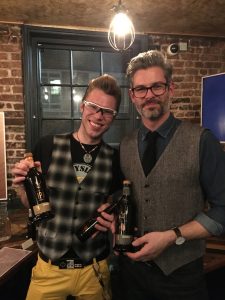