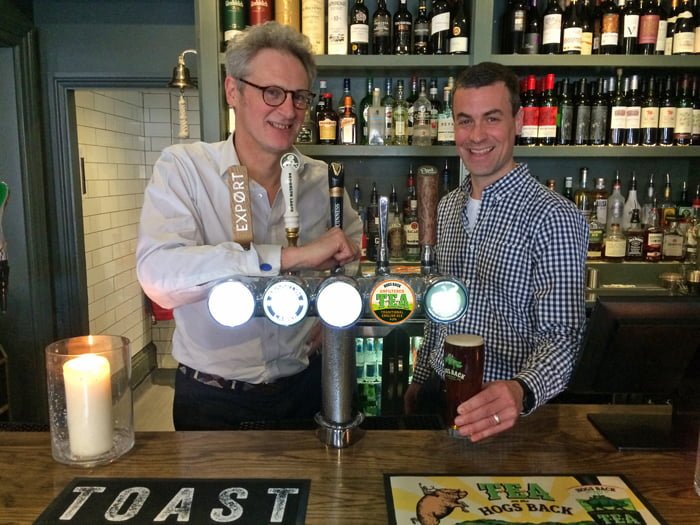 Farnham-based Hogs Back Brewery is celebrating its latest prestigious award win, after its recently-launched Unfiltered TEA keg ale was given a Gold Medal by the Society of Independent Brewers (SIBA).

Unfiltered TEA was named the best Keg British Beer for the South East in the up to 4.4% ABV category at the SIBA Independent Keg Beer Awards 2019. Judged by brewers and industry experts, the awards are given to the very best beers produced by Britain’s thriving independent brewing sector. The winners were announced at SIBA’s BeerX event, taking place in Liverpool.

The medal-winning beer is an unfiltered version of Hogs Back’s flagship TEA (Traditional English Ale). At 4.2% ABV, it is a full-bodied bitter, brewed in small batches using English malt carefully balanced with Fuggles hops, some of them grown in the Hogs Back hop garden.

Unfiltered TEA is cold-conditioned for one week. Being unfiltered keeps the sweet malty character of TEA during this process, so it can be served colder with an optimal flavour and a natural slight chill haze.

Rupert Thompson, managing director of Hogs Back Brewery, said, “We’re delighted that Unfiltered TEA has won such a high profile award from SIBA, so soon after its launch. It’s a testament to the hard work our Master Brewer Miles Chesterman and his team have put into crafting premium quality, great tasting keg beers which complement our established cask beer range, including TEA itself.”

The award-winning Unfiltered TEA is available in the Hogs Back Brewery Shop, The Castle Inn in Farnham, G Live in Guildford and the Four Seasons in Dogmersfield

• Hogs Back Brewery has won a number of SIBA Awards in recent years. Hogstar won a Gold in the SIBA Independent Keg Beer Awards 2018 South East region, along with a Bronze medal nationally, and also won Gold nationally in the 2014 awards. Hogs Back also won the SIBA Business Innovation Award 2016 for the investment in its hop garden, which has been expanded this year.