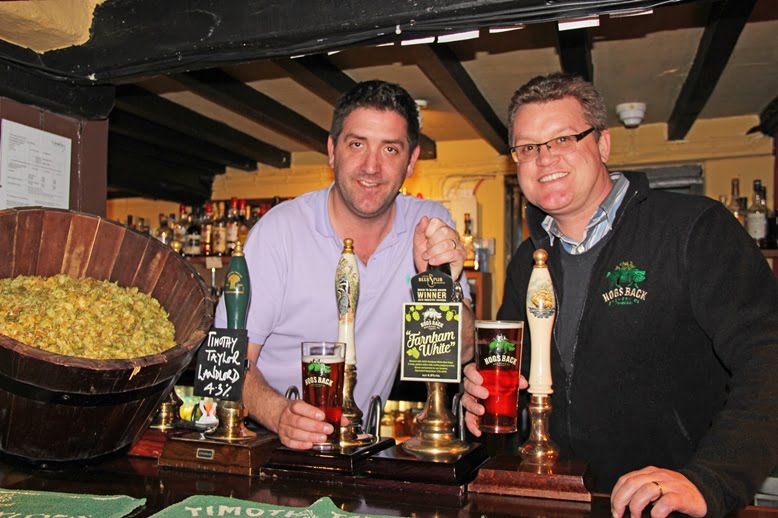 Hogs Back Brewery has marked the start of the first harvest from its Hop Garden with a special event for customers, the local media, and beer writers. The Surrey brewer’s guests had the opportunity to see the entire process from picking fresh hops right through to enjoying a ‘green hopped’ pint of ale over a picnic lunch in the garden.
The harvest includes the Farnham White Bine variety, a near-extinct hop once highly-prized by brewers for its aroma. Hogs Back Brewery is bringing the White Bine back to its home in the 250th anniversary year of its development by local hop farmer Mr Peckham Williams of nearby Badshot Lea.
As well as picking some of the first hops from the 3.5 acre hop garden adjacent to the brewery, the group spent time at the nearby Hampton Estate, which will be drying the Hogs Back Brewery crop for use in its beers, including flagship ale TEA.
After seeing some of Hampton Estate’s crop of Fuggles hops cut, picked and dried, it was back to the brewery where head brewer Miles Chesterman added whole hops from the Hogs Back garden to a specially-brewed ale. This ‘green hopping’ was a traditional way to celebrate the harvest in hop-growing communities.
Hogs Back Brewery managing director Rupert Thompson also demonstrated a selection of traditional hop-picking equipment, including antique stilts used to reach the highest hop flowers, on loan from the Farnham Museum. Thompson said: “We’re very proud to be reviving the local hop-growing tradition, so it was wonderful to welcome our guests and celebrate traditions such as raising a glass of green hopped ale.
“There has been great interest locally in the hop garden, and we’re collecting many of our friends and neighbours’ memories of Farnham’s hop picking heritage. As we celebrate the 250th anniversary of the arrival of the Farnham White Bine, we’re also very much looking forward. We’re drawing on Britain’s rich brewing heritage to create innovative styles such as our Hogstar English Lager and Montezuma’s Chocolate Lager, as well as continuing with our traditional ales such as TEA, and the hop garden is central to our approach.”
Tim Hampson, award-winning beer writer and chairman of the Guild of British Beer Writers, said: “It was an excellent event, and I learnt a lot about the process of growing, picking and preparing hops for brewing. There is huge consumer interest in local food and drink, so it’s great to see a British brewer investing in growing British hops for their own beers.”
As well as the Farnham White Bine, Hogs Back Brewery is also harvesting Fuggles, used in TEA, and Cascade, used in Hogstar English Lager. The brewery is expecting a crop of around 30 zentners or 1,500 kilos – enough for 25% of their annual beer production.
Captions to attached images:
Rupert Thompson with vintage hop stilts
Head brewer Miles Chesterton (far right) leads hop picking
-ends-
NOTES TO EDITORS
Hogs Back Brewery
• Hogs Back Brewery was founded in 1992 in Tongham, Surrey, in the heart of the traditional Surrey hop growing area, and bought by current owner Rupert Thompson in 2011.
• Its flagship brand TEA, or Traditional English Ale, is the leading independent ale in Surrey and increasing in popularity throughout London and the South East, as well as being sold in leading supermarkets. TEA was recently awarded the Gold medal in the Best Bitter Category for the London and South East Area by CAMRA, the Campaign for Real Ale.
• The Hogs Back Brewery range includes a number of award-winning draught and bottled ales. Recent launches include Hogstar English Lager and Montezuma’s Chocolate Lager, both demonstrating Hogs Back Brewery’s ability to combine brewing expertise and tradition with product innovation to create distinctive, memorable beers. Hogstar won a Gold award at the Society of Independent Brewers’ National Keg Beer Competition 2015. Last year, Hogs Back also launched a traditional cloudy cider, Hazy Hog.
• In 2014 Hogs Back Brewery planted its own hop field on land adjacent to the brewery, bringing the traditional but near-extinct Farnham White Bine hop variety back to its Surrey home.
• Hogs Back Brewery is growing its presence in both the on and off trade. Customers include Sainsbury’s, Waitrose, Majestic Wine, JD Wetherspoon, Mitchells & Butlers, Greene King and Spirit Pub Company