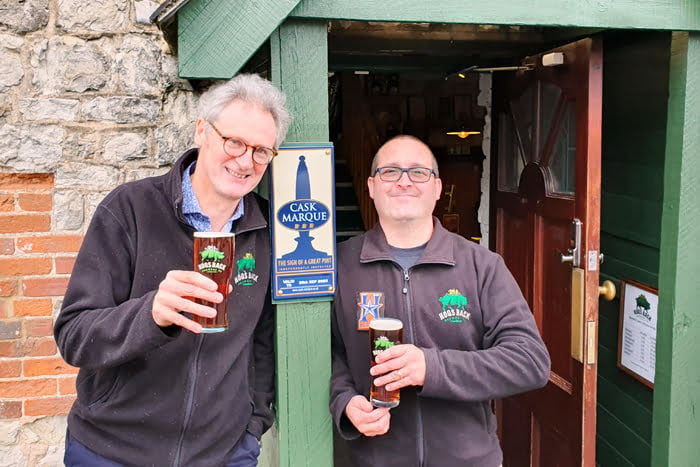 Hogs Back Brewery has gained accreditation from Cask Marque after passing a rigorous inspection of the beers served at its Brewery Bar, located next to the brewhouse in Tongham, Surrey.

The accreditation carries special significance for Hogs Back as the brewery’s managing director Rupert Thompson was one of the founders of Cask Marque in 1998. Despite championing beer quality for more than 20 years, this is Thompson’s first bar and his first opportunity to apply for Cask Marque accreditation.

The Hogs Back bar opened earlier this year, in an area just outside the brewhouse with a canopy, lighting, sound system and seating for 30 people. Initially created as a summer bar, it has been so popular locally that Hogs Back is planning to keep it open year-round.

All cask beers served in the bar are poured through handpulls rather than direct from the barrel, which is the more usual practice in brewery bars. Beers served include Hogs Back’s flagship ale TEA and Surrey Nirvana in cask, as well as Hogstar Lager, Hog IPA and Little Swine lower strength beer in kegs.

Two decades ago, as brands and brewing director of Oxfordshire brewer Morland, Thompson was part of the small group that founded Cask Marque to address quality concerns. He said, “Since helping to establish Cask Marque in 1998, I’ve been part of the movement to improve the quality of draught beer in pubs and bars. We’re delighted that the Hogs Back bar has passed the Cask Marque inspection, and our plaque is in pride of place at the Brewery Shop entrance.

“There’s no doubt that standards now are higher than they were, meaning more drinkers are enjoying a pint of beer served as it should be – and are therefore more likely to order another. This is good news for drinkers, licensees and brewers, and I’m proud both to have been there at the start, and to continue to work to consistently serve great tasting, high quality cask beer.”
He added, “It’s been wonderful to see local drinkers enjoying our Summer Bar, which we are imaginatively renaming as the Winter Bar as we go into the colder months, equipped with heaters, more canopies and a changing selection of beers which will include Advent Ale closer to Christmas.”

Paul Nunny, Cask Marque co-founder, said, “It gave us particular pleasure to present Hogs Back Brewery with a Cask Marque plaque, given Rupert’s contribution to the scheme’s success.
“The Cask Marque plaque is now recognised by 77% of UK consumers as a guarantee of good beer, and many now use the CaskFinder App when choosing a pub to visit. It’s good to know that the Hogs Back Brewery Bar is now one of them, and part of the World’s Biggest Ale Trail on the app.”

The Hogs Back Bar will be open on Wednesday, Thursday and Friday evenings and at weekends and Hogs Back are planning to hold exclusive TEA Club events. For opening hours and details of events, visit the Hogs Back Facebook page.