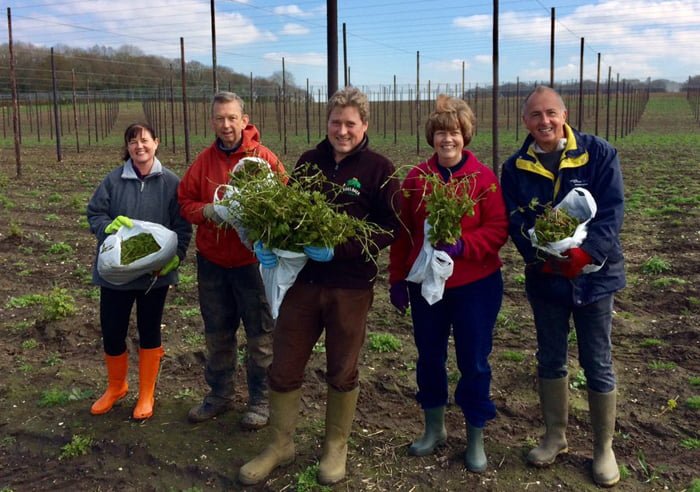 Diners in Surrey will have the chance to try an unusual, but traditional, ingredient in a handful of pubs across the county from this Saturday (13th) as contestants in the annual ‘Hogs Back Hop Shoot Challenge’ serve up delicious dishes containing hop shoots – or ‘Poor Man’s Asparagus’.

The competition, now in its fifth year, challenges chefs across the Red Mist Leisure pub group to create a recipe using the tips of the hop shoots. The shoots are being cut today (Wednesday) in the Hogs Back hop garden next to the brewery in Tongham, and delivered immediately to the pubs for the chefs to work their culinary magic. The winner will be chosen on Friday, but all participating chefs will serve their creations in their pubs over the weekend, for as long as their supply of hop shoots lasts.

Winning dishes in past years include a ‘Surrey Smorgasbord’ including hop-flavoured bread, a risotto and a ‘Real Ale Salad’. Last year’s winner was Adam Sullens from the Queen’s Head in East Clandon, who created a hop-infused tortellini.

Rupert Thompson, managing director of Hogs Back Brewery, said: “We’re delighted to be running the Hop Shoots Challenge again with Red Mist Leisure pubs and are looking forward to seeing the dishes produced by their talented chefs. Based on previous years, we’re expecting a range of impressive dishes, and choosing a winner won’t be easy.

“Hop shoots aren’t the easiest ingredient to work with – they don’t last long after cutting, so they have to be delivered to the pubs straight away and used quickly as they can only be served while they are new and fresh. We’d recommend diners visit their local Red Mist Leisure pub early this weekend to be sure of tasting a hop shoot dish.”

Thompson added: “The Farnham area was historically one of the most important hop growing regions in the country with hops such as the Farnham White bine prized for their delicate aromas. We’re delighted that, as well as restoring hop growing locally with our hop garden, we’re also reviving the use of hop shoots as a fresh, local ingredient in great pub food.” Hop shoots were a country delicacy in the 19th century and today are often served pickled in bars across Belgium.

The winner of the competition will be posted after Friday on Hogs Back social media @HogsBackBrewery. Hogs Back Brewery planted a hop garden adjacent to its brewery in 2014, growing three hop varieties: Fuggles – used in its flagship TEA ale; Cascade – used in its Hogstar lager and Farnham White Bine, a local variety that it rescued from extinction. It has recently relocated and expanded the garden, siting it closer to the brewery within Manor Farm. The new site, at 8.5 acres, is close to three times the size of the previous one, and when fully mature will provide 50% of Hogs Back’s hop requirement.