Hop harvest captured for Halloween on the Farm 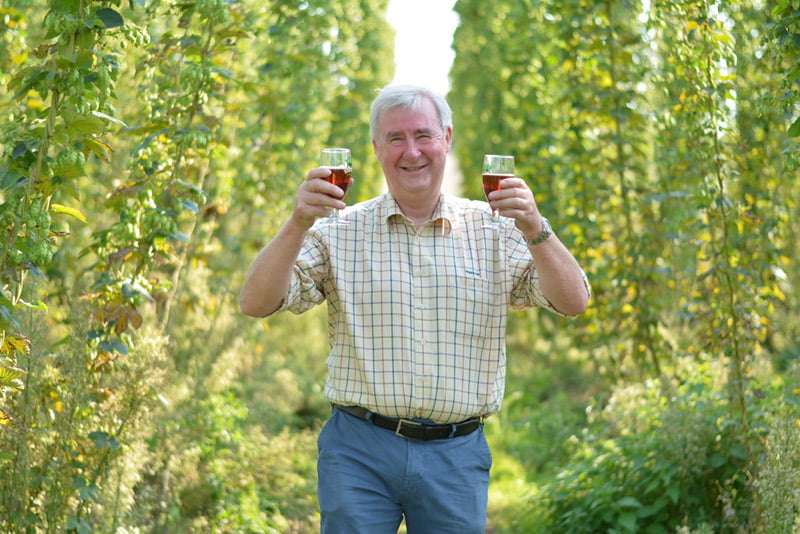 The Hogs Back Brewery hop garden in Tongham, Surrey, is to feature in Halloween on the Farm, a Channel 5 programme airing this Friday, 30th October at 9.00 pm.

The film crew spent a day in the hop garden and brewery at harvest time in September, following presenter Peter Wright as he helped to load hop bines onto the tractor, feed them into the hop picker and then the kiln and add fresh hops to beer in the brewhouse. Finally, he enjoyed a glass of green-hopped TEA with Hogs Back owner Rupert Thompson.

This year’s harvest was Hogs Back’s first commercial harvest from its new hop garden, planted last year. It is also the first time they have carried out the harvest themselves, rather than sub-contract as previously, after investing in a new tractor, hop picker and kiln.

Peter Wright is the star of Channel 5’s The Yorkshire Vet and has also appeared in the channel’s Springtime on the Farm series.  He said: “I love working on farms, and helping Hogs Back to bring in their hop harvest has been a wonderful experience. There’s a lovely atmosphere in the hop garden and in the brewery, that comes from all the people who work here: they love their work, love what Hogs Back are doing in growing their own hops, and the result is great team work.

“I’ve visited quite a few microbreweries in my time and the beers I’ve had today are some of the best I’ve tasted. It’s a shame Hogs Back isn’t a bit closer to Yorkshire!”

Rupert Thompson added: “We were delighted to host Peter and his colleagues and we’re thrilled to be sharing our hop harvest with millions of Channel 5 viewers.

“It has been a difficult seven months for us, as it has been for everyone in the beer and pubs sector, but we have no complaints about our harvest, which has gone pretty smoothly, especially considering that it is the first commercial harvest from our new hop garden, using our new equipment.”

He added: “Processing our hops at the brewery reduces our carbon footprint. They never leave our site, so they really are travelling ‘from field to firkin in a furlong’, allowing us to become a more sustainable brewer, which has been our ambition since planting the original hop garden six years ago.”

Halloween on the Farm is a special episode within the Friday on the Farm series from Channel 5, based at Cannon Hall Farm in Barnsley with farmers Rob and Dave Nicholson but celebrating farming across the country.

Halloween on the Farm is on Friday at 9pm on Channel 5.

Caption to accompanying image: Halloween on the Farm presenter Peter Wright in the Hogs Back Brewery hop garden