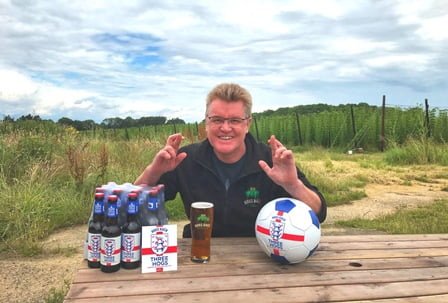 England’s historic victory against Denmark was a bittersweet result for Surrey-based Hogs Back Brewery, who now have to honour their pre-tournament pledge to give away pints of their Euros beer Three Hogs if Southgate’s squad reached the final.

Three Hogs was brewed as a draught beer for the Euros in 2016 and the World Cup in 2018, and this year was this year made available in bottles as well to meet demand. To fulfil their promise, Hogs Back are offering a free pint to anyone visiting the brewery near Farnham this Saturday to buy beers for England’s clash against Italy on Sunday.

Hogs Back Brewery managing director Rupert Thompson said: “No brewer ever likes to give away their beer, but we can’t think of a better reason! In all honesty, we thought our beer was safe when we made the offer, but we are delighted to find that we underestimated the England side’s skill, determination and, yesterday at least, luck. Every free pint will be served across our bar with a broad smile – and firmly crossed fingers!

“We’re also wondering if our free pint promise has been something of a talisman: we first offered it if England reached the Euros 2016 final, when the squad came home early, and then again for the World Cup in 2018, when they reached the semi-finals. To see the progression continue has been wonderful, particularly after the last terrible 15 months for pubs and beer.

“We’ve shown every England game in our Brewery Tap, with the level of excitement building to the fever pitch we’re expecting for Sunday’s sold-out session. Let’s hope that the celebrations continue as football fans in our bar, and across the country, see Harry Kane and his team lift the trophy.”

To claim their free pint of Three Hogs – or another draught beer – customers need to spend at least £10 in the Hogs Back Brewery Shop and can enjoy their pint in the Brewery Tap between midday and 10.00 pm on Saturday.

A 4% ABV golden ale, Three Hogs is brewed with a selection of English malts and hops including Fuggles grown on the Hogs Back hop garden next to the brewery, as well as Cascade and Centennial. The pump clip and bottle label describe the ale as “a beer of two halves: refreshingly hoppy up front, followed by a balancing bitterness and a hint of sweetness to finish”.

Caption to above image: Gordon Thompson, Hogs Back Brewery sales director, has everything crossed for England’s success on Sunday. Photo taken at the Brewery Tap, overlooking their hop garden.