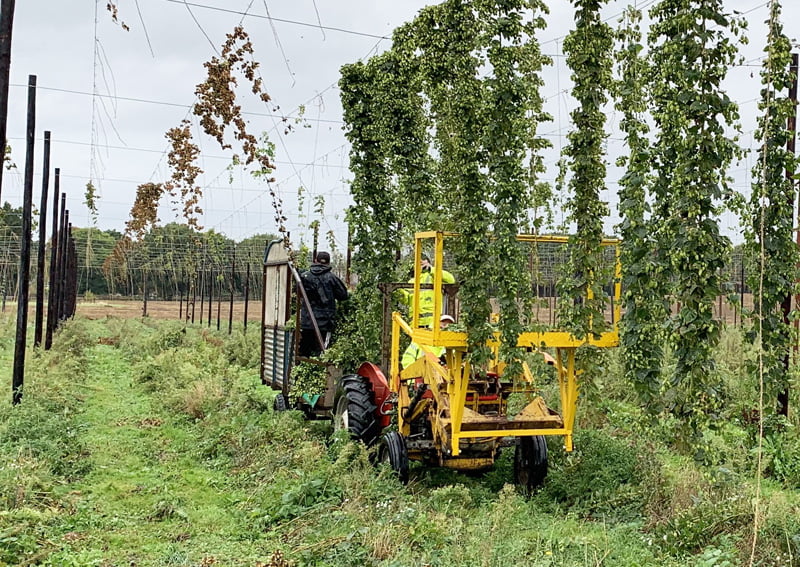 After two weeks of dedicated toil by a team of 22 workers, Hogs Back Brewery in Tongham, Surrey, has completed the first commercial harvest from its new hop garden, collecting and processing 1,500 kilos – or 30 zentners, the traditional measure of hops – which are now in cold storage at the brewery, ready to be added to their range of beers.

Hogs Back staff, loyal customers from its Tongham TEA Club and local residents worked in the 8.5-acre plot next to the brewery, cutting down the 6,600 hop bines, which had grown up to a height of 18 feet. The bines were fed into a hop picker – which carefully separates the hop cones, required for brewing, from the rest of the bines. The cones were then dried in a kiln, quickly vacuum packed to capture their flavour, and are now cold stored at 5°C until needed by the brewing team.

To harvest the hops themselves, rather than contract the task as in previous years, Hogs Back commissioned new equipment including a tractor, reconditioned Wolf hop picker and a new kiln. The picker and kiln were housed in the Hop Hangar, which functions as the Brewery Bar when not in use for hop processing.  It is just yards from the hop garden and the brewhouse.

Hogs Back managing director Rupert Thompson said: “Bringing in our first harvest is a real achievement, and we’re delighted that it went so smoothly. Its success is a testament to the hard work by our harvest team, who put in long hours in the garden and Hop Hangar.

“We cut the hops at just the right time, then processed them quickly, so the hops we now have ready in storage are in optimum condition, which will translate into top quality, flavourful beers when they’re added to the brew.

“By harvesting the hops ourselves, we made sure they never left the brewery site, travelling just yards from the garden to the brewhouse, or ‘from field to firkin in a furlong’. Cutting our carbon footprint and becoming a more sustainable brewer has been our ambition since planting the original hop garden six years ago and this harvest is a milestone in achieving that.”

He added, “The hop plants are still establishing themselves, so the crop was light this year – but it still represents about 25% of our total hop requirements. When the garden is mature, and with the right weather, we eventually hope to harvest around 4,000 kilos.”

The hop harvest team were rewarded for their labours with a supply of Green TEA – a version of Hogs Back’s flagship beer, brewed with newly picked hops rather than dried ones. Green TEA is available for just a couple of weeks after harvest, and a limited number of firkins were also distributed to local pubs and drinkers.

TEA Club member Ted Block said: “Helping to bring in the harvest was a wonderful experience.  It was hard work, as it’s very physical, whether you’re pulling down hop bines onto the trailer, or feeding them into the picker or kiln.

“After the year we’ve had, being able to get out in the fresh air and sunshine was a really welcome change of scene. It felt good to be continuing the tradition of hop farming, which has been such an important part of life in Farnham. I’ll definitely be volunteering to help with next year’s harvest.”