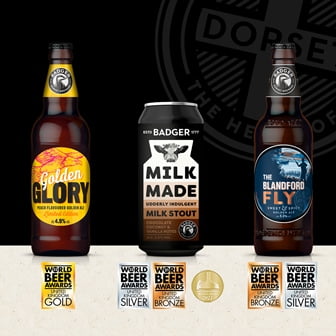 Dorset family brewer Badger Beers is celebrating a new round of awards success, with three of its beers winning medals at the World Beer Awards (WBA) 2022.

Badger is also launching its award-winning Milk Made stout in keg this autumn, as well as bringing medal-winning cask conditioned winter ale Red Roaster back to its pubs as a seasonal cask beer.

Giles Mountford, Drinks Marketing Manager at Badger Beers said: “We’re delighted with these latest accolades, which build on a series of awards for our beer range, notably in the International Brewing Awards 2021.

“We continue to develop new, contemporary, and innovative craft beers such a Milk Made, which complement our established strength as a brewer of fine traditional bottled and cask ales.

“Our brewing team has plenty more innovation in the pipeline, and so we’re looking forward to having to install an even bigger trophy cabinet in the brewery at Blandford St Mary in due course.”